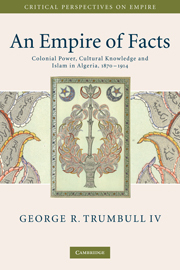 An Empire of Facts

In February of 1896, in the Algerian littoral town of Berrouaghia, a French colonial administrator took a photograph. In it a dark-skinned, bearded man in his late thirties sits next to a white-washed, thatch-roofed stone house. On his knees a large, elaborate, gilt-edged book lies open, neatly framed by the white of his robes and the dark color of his sash. Next to him stands a small boy, perhaps seven or eight years old. Both stare solemnly at the camera. The photograph, sepia-toned and faded, adorns a report on Islamic religious orders, one of many similar reports that provided the research for the seminal studies on North African Islam. Possibly this nameless administrator saw this photograph as a way of emphasizing the veracity of his report, or perhaps even of making his work seem thorough enough to merit promotion out of his position as a low-level bureaucrat in Berrouaghia.

For Berrouaghia was something of a backwater in the 1890s. Despite its location on a major road running from the coast to the south, it had yet to attract the attention of many French tourists, or, in fact, of almost anyone. In the words of one visitor, in 1887, “Berrouaghia is a beautiful village, well built, animated.… The hot, sulfurous baths of Berrouaghia, much appreciated by the inhabitants, will be for this interesting little place a source of wealth, when the magnificent bathing pavilion that is being built is completed.” It was a place of potential. The French governed the town, with its surrounding area, as a commune mixte, meaning that it had a considerable amount of rural territory attached to it, a sizable indigenous population (in 1890, about 250 in the village from which the commune-mixte took its name), and few Europeans; it had vineyards, Roman ruins, a single hotel. The more than thirty thousand residents of the commune were, thus, a mix of Algerian Muslims and scattered Europeans—French, Spanish, Italian, Anglo-Maltese, and others. One rare traveler referred to it as “neither European country nor Arab country, that area, it’s Algerian country.” Infamous in the 1990s for terrorist violence and a massacre at its prison, Berrouaghia in the 1890s was famous for nothing.

Hence, Berrouaghia might seem an odd place to look for the encounters that determine ethnographic texts, for colonial relations of participant observation, and for a seminal moment in the history of French orientalism. However, the colonial state in Berrouaghia, and in Algeria in general, adopted ethnographic methodology in the hopes of understanding and controlling the political role of Islam. Just as Third Republic leftists expressed profound anxieties over Catholicism as a danger to secular governance, and just as vitriolic, anti-Semitic elements of the extreme right attempted to portray Judaism as a political threat, French administrators in Algeria perceived any organized form of Islamic piety as a menace to colonial control. Apprehensions about religion’s role in politics extended to the colonies, even to remote Berrouaghia; as a result, French administrators took a lively interest in Islamic mysticism and ritual from the beginning of the occupation of Algeria. Ambivalence regarding the political role of religion dominated republican discourse through the Third Republic. The threat, real or imagined, of religious communities engaging in political activity destabilized both metropolitan France and its colonies.

A Colonial Atlas of Extinction
The extinction of the Atlas Bear, Barbary Lion, and Bubal Hartebeest may have deprived North Africa of its charismatic megafauna, but their disappearance also tells a story of changes in how humans see their natural world.
Land of Thirst and Fear: A History of Water in the Sahara from Empire to Oil
“If you knew the secrets of the desert, you would think like me; but you are ignorant of them, and ignorance is the mother of evil.”--Emir `Abd al-Qadir

An Empire of Facts: Colonial Power, Cultural Knowledge, and Islam in Algeria, 1870-1914
A fascinating account of French conceptions of Islam in France's largest and most important colony